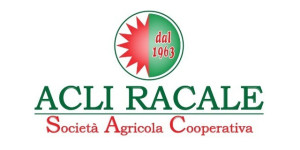 The Soc. Coop. ACLI RACALE is a cooperative founded in 1963 by some farmers of the southern Salento with the initial aim to join forces to better address the dynamics of the marketing of the early potatoes of Galatina, especially the variety Sieglinde, and of the olive oil. The Cooperative is equipped with its own pharmacy farm for distribution to shareholders of fertilizers, agrochemicals and other materials for agriculture, and ensure technical assistance to its own shareholders through several agreements with agronomists. A first warehouse, of approximately 1,000 square meters, is located in the town of Racale, directly connected with the railway station. In this warehouse, in the early 90’s the cooperative invested in the equipment of a modern system for the extraction of olive oil; in the early 2000s it was built the present headquarter (in Via Ugento) of 1800 m2, focused more on the production of extra virgin olive oil and processing of potatoes, while maintaining active the old factory in the town mostly dedicated to the production of lamp oil. Currently the cooperative count on the adhesion of about 600 farmers, 200 of them are olive growers. Our two oil mills process approximately 1.100 tons of olives, mainly of cultivars “Ogliarola di Lecce” and “Cellina di Nardò”, producing about 90 tons of extra virgin olive oil, 25 tons of virgin oil and 25 tons of lamp oil. The average production of potatoes range around 2,000 tons per year, mainly of varieties that Sieglinde who, in July 2013, received the DOP (Protect Denomination of Origin). The Cooperative currently employs 4 full-time work units and up to 30 seasonal workers during the months of the processing of olives and potatoes.

ROLE IN THE PROJECT

The Soc. Coop. ACLI RACALE is dealing at the forefront with the severe impacts of the OQDS disease of olives, playing an important role in raising the growers and nurserymen awareness on the novel disease and its implications, as well as getting a clear picture of the different olive grove management adopted in the contaminated area; therefore this partner is in the right position to test strategies aimed to contain the spread and the impact of the Xf infections. Its major activity will be developed within the task 1a (Aetiology of the Olive Quick Decline Syndrome), 9a (Practical solution for management and containment of Xf infections), and 10 (Dissemination of technical and scientific results and demonstrative fields).