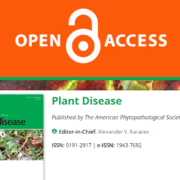 During the 2014 to 2016 growing seasons, a severe decline of olive (Olea europaea L., 8 to 30 years old) was observed in several orchards (approximately 50 ha) located in Apulia (Southern Italy). Affected trees (20 to 40% per orchard) showed stunted growth, chlorotic leaves, and dieback of twigs and branches. Root collar and large roots showed black, sunken, necrotic lesions, usually associated with linear bark cracking, frequently extended up to 60 to 70 cm height on the trunk. The necrotic lesions girdled the trunk, causing the death of the plant.

Samples of necrotic roots and bark were collected from symptomatic trees, surface disinfected by dipping for 3 min in a dilution of 650 ml/liter of a commercial bleach containing 5.5% sodium hypochlorite with added stabilizers, and then rinsed in sterile distilled water. Portions (5 × 5 mm) from the leading edge between healthy and diseased tissue were plated onto potato dextrose agar (PDA) and synthetic low-nutrient agar (SNA) amended with streptomycin sulfate (300 mg/liter). After 8 to 10 days of incubation at 21 ± 2°C, colonies with Cylindrocarpon-like asexual morphology were isolated from 94% of affected trees. The colonies were pale yellow-brown to light chestnut in color, turning dark yellow to orange-reddish-brown with age.

Several colonies (18 out of 21) among those with Cylindrocarpon-like morphology showed cottony to felt-like mycelia on PDA, beige to chestnut in color, whereas the remaining three were white to beige. On SNA, two selected isolates of the prevalent morphology (N37IL and N39IL) produced straight or slightly curved conidia, cylindrical, 1 to 3 septate, measuring 34.7 to 39.6 × 5.2 to 7.4 μm. Culture and conidial morphology were in concordance with published descriptions of Dactylonectria torresensis (Lombard et al. 2014) (syn: Ilyonectria torresensis [Cabral et al. 2012]). To confirm the identity, the internal transcribed spacer (ITS) region, partial sequence of β-tubulin (TUB2), and actin (ACT) genes were amplified using the primers ITS5/4, T1/bt2b, and ACT-512F/ACT-986R, respectively (Glass et al. 1995; White et al. 1990). Polymerase chain reaction products were sequenced and deposited in GenBank with accession numbers KP411806 (ITS), KP411801 (TUB2), and KP411804 (ACT). A BLAST search revealed that all sequences showed 99 to 100% homology with the corresponding sequences of previously identified D. torresensis isolates.

Pathogenicity of D. torresensis in olive was investigated using a pure culture of the isolate N37IL. The foot and the roots of 1-year-old olive trees, cultivars Leccino and Picholine (10 replications per cultivar arranged in a completely randomized design), were inoculated by dipping the roots and the crown in a spore suspension (5 × 106 conidia/ml) or in sterile, distilled water (control) for 2 min. After transplanting in 5-liter pots, plants were kept outdoors under a structure with roof and side walls 3.5 m high made of shading screen (5 × 7 sun shade mesh), at a temperature approximately 18 to 28°C during the experiment. Five months after inoculation, most of the inoculated plants showed chlorotic leaves, like those observed in the field. Typical black-foot symptoms (Cabral et al. 2012) developed on all the inoculated plants within 7 months, whereas the controls remained healthy. D. torresensis with the same morphology as the initial isolate was reisolated from the inoculated plants.

Published on February 6, 2019 by PLANT DISEASE

Ponte ProjectThis special issue of #ponteprojecteu newsletter is dedicated to the dissemination material realized on… https://t.co/IyzdmdX5HV2 years ago 6 9
Identification of genetic relationships and subspecies signatures in Xylella...